Need some extra ENERGY that’s safe and natural? …with NO Caffeine!

ReCharge contains factors to re-energize each cell while restoring function to the “little organs” – the mitochondria – that are the energy producers in each cell. This potent formula repairs the deep structure of each cell while recharging its energy batteries.

The culmination of Gematria’s advanced technology platform combined with an innovative nutritional formulation, ReCharge provides you with powerful components to rebuild and restore every cell in your body from head to toe. More than just a basic supplement, ReCharge contains metabolic compounds that have been shown in research studies to have profound effects on energy, longevity, and wellness.

1 oz. dropper bottle is a one month supply taken as directed.

Gematria Products, Inc. is proud to announce its latest in the arena of revolutionary breakthrough nutritional formulas. Our patented technology has the ability to increase the benefits of a given nutrient to significantly greater levels. This allows a given amount of a substance to give greater health effects gram for gram.

This process, known as photoacoustic resonance, has received international patents, with additional international application patents pending. In development for over 12 years, this advanced technology platform tunes a molecule with sophisticated laser impulses in much the same way as a tuning fork tunes a particular string on a piano. This tuning procedure strikes resonance patterns in molecules that can ring and align the molecules to a consistent form that is efficiently assimilated and used in the body.

The increased efficiency of utilization can make it possible to get much more value from a metabolic compound before the body would otherwise excrete it or break it down into other components of little value.

Enter ReCharge – The culmination of this advanced technology platform combined with an innovative nutritional formulation called ReCharge provides you with powerful components to rebuild and restore every cell in your body from head to toe.

More than just a basic supplement, ReCharge contains metabolic compounds that have been shown in research studies to have profound effects on longevity and wellness. ReCharge contains factors to re-energize each cell while restoring function to the “little organs” – mitochondria – that are the energy producers in each cell. This potent formula repairs the deep structure of each cell while recharging its energy batteries.

The liquid dropper delivery system of laser enhanced metabolic compounds allows rapid absorption and ease of use. Whether given as a tonic to promote general health and vitality, or to help you through a challenge, ReCharge provides instant support.

This important molecule transports fats into mitochondria for fat burning and increased cellular energy. It inhibits formation of aging pigment in brain cells of lab animals. Its use in humans has been associated with increased intelligence and improved mood. ALC has been shown to enhance energy metabolism at the mitochondrial level and has been found to benefit many tissues. Immune cell function has improved and nerve cells are protected. Lab animals given ALC have shown a 30% increase in life span.

The amino acid L-Carnitine acts as a kind of escort service for fat, moving it into the little power centers of the cells (called mitochondria) so that the fat can be burned for energy. Quite simply, without optimal amounts of L-Carnitine, there is not optimal fat burning taking place. By facilitating the youthful transport of fatty acids into the cell’s mitochondria, L-Carnitine better enables dietary fats to be converted to energy and muscle.

L-Carnitine has also been shown to protect cells throughout the body against age-related degeneration. Most clinical research has focused on the brain, where improved mood, memory and cognition have been observed in response to L-Carnitine administration.

This nutrient has been found to elevate mood, improve learning and memory, increase intelligence, and boost physical energy. It may retard or reverse the damaging accumulation of aging pigment in the brain and has been shown to extend the life span of laboratory animals. It has a mild safe stimulant effect, yet most persons who use it find it easier to get to sleep.

N-Acetyl-Cysteine is derived from the sulfur-containing amino acid, cysteine. NAC is one of the precursors to glutathione, which is the body’s most important cellular antioxidant. NAC is better than glutathione supplements, which may break down during digestion and lose potency.

This amino acid has a potent anti-oxidant action in the spaces between cells. It is one of the most abundant amino acids in the body. It is found in the central nervous system, skeletal muscle and is very concentrated in the brain and heart. It is synthesized from the amino acids methionine and cysteine, in conjunction with vitamin B6. Animal protein is a good source of taurine, as it is not found in vegetable protein. Vegetarians with an unbalanced protein intake are often deficient in methionine or cysteine and may have difficulty-manufacturing taurine.

Acerola is a small, bright red, berry-sized fruit with a Vitamin C content up to 65 times that of an orange. A single acerola berry contains the minimum daily recommended requirement of Vitamin C. Vitamin C is a powerful antioxidant, which supports the immune system – preventing colds and other illnesses, shields the body from damaging environmental toxins, and protects cells from free radical damage. It is also essential for proper adrenal function, the formation of collagen, tissue health and the absorption of other nutrients.

D-Alpha-Tocopheryl is a major anti-oxidant nutrient. It supplies oxygen to the blood, which is then carried to the heart and other organs, providing the body with energy and protecting the cells against the effects of free radicals. There are at least eight different naturally occurring forms of Vitamin E. D-alpha-tocopherol is considered to have the highest biological activity because it is continually being recycled by the liver.

Vitamin B12 is a particularly important coenzyme that is required for the proper synthesis of DNA, which controls the healthy formation of new cells throughout the body. Methylcobalamin (B12) donates methyl groups to the myelin sheath that insulates nerve fibers and regenerates damaged neurons. In a B12 deficiency, toxic fatty acids destroy the myelin sheath but high enough doses of B12 can repair it. Vitamin B12 comes in several kinds including hydroxy-, cyano-, and adenosyl-, but only the methyl form is used in the central nervous system. B12 also supports the action of vitamin C, and is necessary for the proper digestion and absorption of foods, for protein synthesis, and for the normal metabolism of carbohydrates and fats.

Additionally, vitamin B12 prevents nerve damage by contributing to the formation of the myelin sheath that insulates nerve cells. B12 also maintains fertility, and helps promotes normal growth and development in children. Deficiency states are fairly common and vitamin B12 deficiency mimics many other disease states of a neurological or psychological kind, and it causes anemia. Vitamin B12 deficiency is caused by a wide range of factors including low gastric acidity (common in older people,) use of acid blockers such as Prilosec™ or excessive laxative use, lack of intrinsic factor, poor absorption from the intestines, lack of Calcium, heavy metal toxicity, or excessive Vitamin B12 degradation.

Biotin is a water-soluble B-group vitamin, which aids in the utilization of folic acid, Pantothenic acid, and other B vitamins. Biotin promotes healthy hair, metabolizes fats, proteins and carbohydrates, helps in the transfer of carbon dioxide and assists in various metabolic chemical conversions.

Shake well. Place one full dropperful of Recharg in your mouth each day. It is best to drop ReCharge under your tongue or between your cheek and gum. 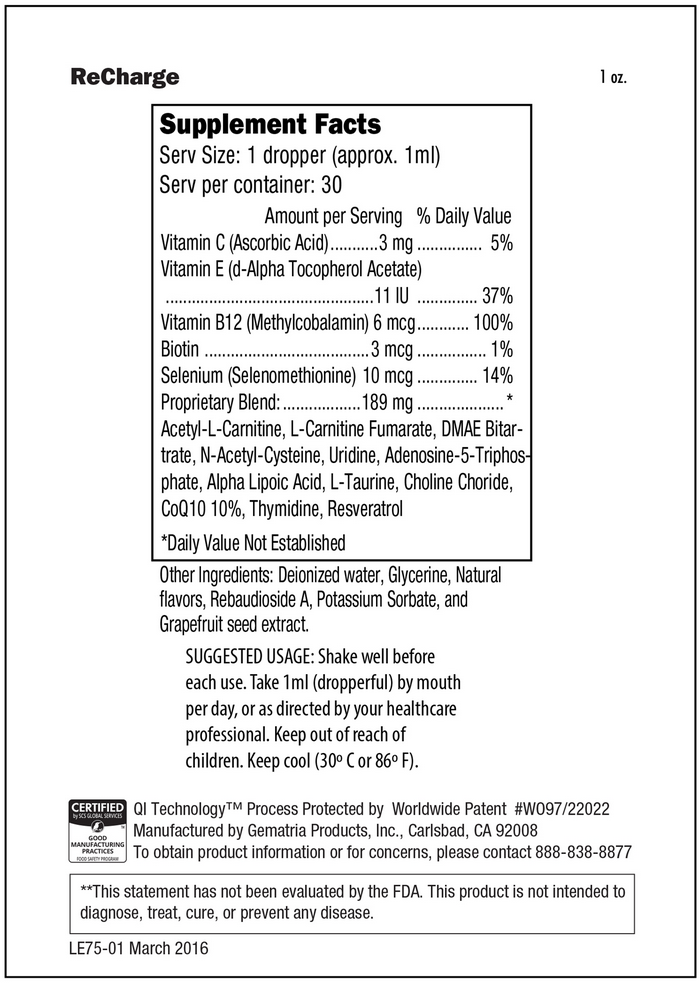