Life evolved in the sea, which contains all the minerals and elements required for cells to function. Oxy-Immune provides a rich composition of 72 elements derived from sea water.\

The source of minerals has been well tested from a GMP (Good Manufacturing Practice) certified laboratory. This assures consistency, potency and safety of our products.

The main purpose of Oxy-Immune is to fill nutritional gaps caused by our crops being grown on increasingly mineral-depleted soil. Eating processed food further stripped of nutrition can further aggravate this tendency to have gaps in your nutrition.

This highly concentrated preparation provides an important class of nutrients known as trace elements in a form in which they can be readily absorbed. In contrast to macro-minerals (macro means large) like calcium and magnesium that your body requires in large quantities, trace elements are needed in only tiny amounts. Even though these amounts are very small, if you do not not get them in sufficient amounts, cellular function drops below optimum levels.

Oxy-Immune contains a rich composition of 72 elements derived from sea water. Life evolved in the sea, which contains all the minerals and elements required for cells to function.

Oxy-Immune has been subjected to placebo controlled clinical testing. In this context, with the study parameters around joint health, the use of this trace mineral formula showed significantly greater support of healthy joint structure and function than did placebo. Oxy-Immune uses the same core formula of trace elements that were used in this study.

Another observation with this preparation is the appearance of red blood cells under a microscope. If cells freshly drawn from a person clump together this means they will have trouble getting through the small capillaries in tissue to deliver oxygen. The use of this formula as recommended has been shown to break up the tendency of cells to clump to facilitate improved delivery of oxygen throughout the microcirculation.

The scientist Otto Warburg won the Nobel Prize for the discovery that normal cells thrive with oxygen delivery whereas malignant cells are inhibited or eliminated. The capacity to deliver oxygen well to all the tissues supports healthy immune function, which is further augmented by providing micro-minerals and other trace elements. While cells may only need trace elements in minute quantities, getting the minimum trace amounts required supports the highest possible health of cells and tissues.

To achieve the greatest possible absorption and utilization, this formula is also enhanced with Qi (Quantum Information) Laser Technology. Studies in agriculture applying this method to minerals and trace elements have shown an up to 2-5 fold greater delivery of the nutrients into the plants compared to the control untreated nutrients. 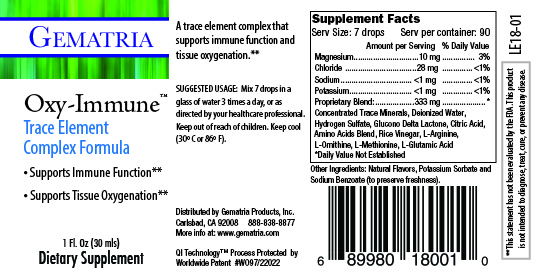 The recommended initial use of Oxy-Immune is 7 drops mixed with 8 ounces of water or juice, consumed 3 times per day.

Getting the undiluted product on skin can be irritating or on clothing could be damaging to fibers.

Getting the undiluted product on your skin can be irritating or on clothing could be damaging to fibers.