Tired of feeling your age? Methusalife is a natural, caffeine-free boost for physical and mental energy.

It also provides the building blocks for healthy cells with anti-aging support and it comes in a convenient liquid spray form.

Metabolism of DNA and RNA

Five nucleic acid bases make up the information code of life. Both DNA and RNA share three of the bases -adenine, guanine, and cytosine. In DNA, the fourth base is thymine, whereas in RNA it is uracil.

The information code in DNA in the cell nucleus is transcribed to b>RNA, which is then translated to all the enzymes and proteins made in the body. The DNA to b>RNA to protein translation mechanism makes possible the vast diversity of life on earth.

When DNA and RNA are ingested intact, they are intensely metabolized by intestinal bacteria and the intestinal lining. Over 95% of the pyrimidines bases cytosine, thymine, and uracil are degraded by the intestinal lining before reaching the blood stream. Only about 3% of the pyrimidines make it to the liver for further use in the body. The fate of the purine bases adenine and guanine is even more extreme. Over 99% of the purines are broken down to uric acid before being absorbed into the bloodstream. Therefore only a tiny fraction of ingested DNA or RNA becomes available for the numerous functions required of them throughout all the cells of the body.

In addition to ingested DNA and RNA elements, the body can make DNA and RNA bases from simpler nutrients in the diet. In particular, the amino acids glycine, glutamine, serine, and aspartic acid, along with vitamin cofactors are used to make DNA and RNA bases from scratch. In order to make nucleic acids from simpler substances requires having all of the precursors and cofactors in adequate amounts at the time of production. In addition, it requires having sufficient amounts of numerous enzymes in the correct proportions and locations in the cell.

Recent evidence indicates that the body is often not able to make enough DNA and RNA to protect, repair, and regenerate cells to their optimum function. This is especially true for cells that have high turnover rates such as the intestinal lining that may fully replace itself every week.

The demand for production may particularly exceed synthetic capacity under conditions of stress in which the demand for greater cell activity and function becomes acute, particularly for the dynamic populations of cells in the immune system.

When demand exceeds production capacity, DNA and RNA base components become essential nutrients for protecting and preserving health. Numerous lines of evidence will be presented to show the far reaching health benefits of supplementing DNA and RNA during health stresses and even for general well being and longevity. 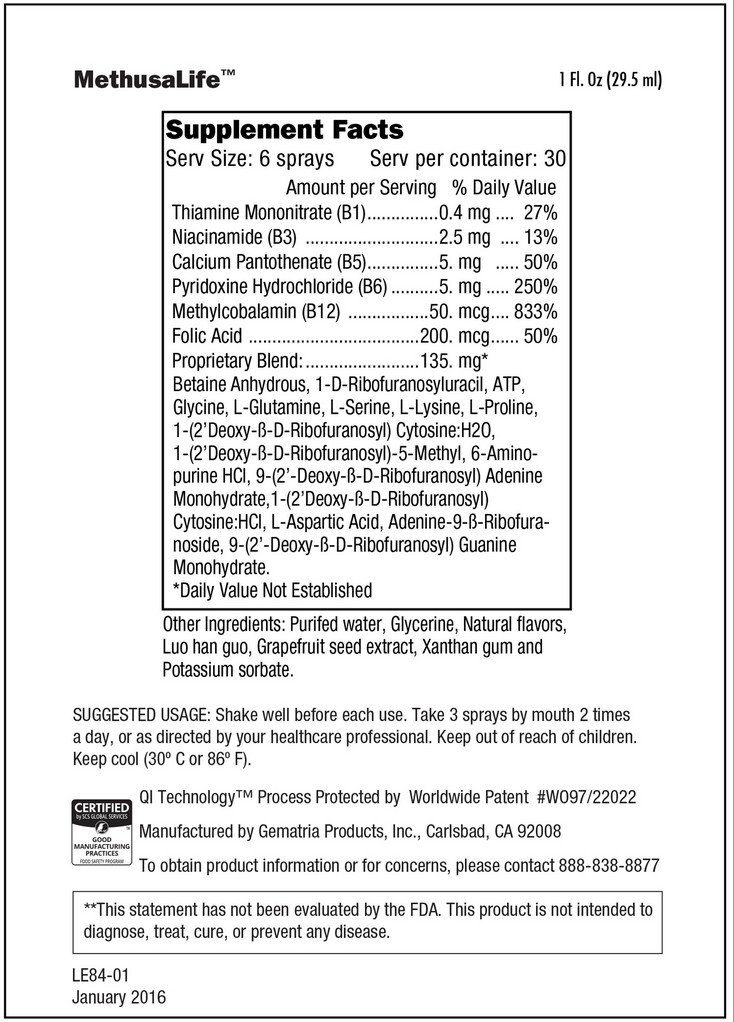 Shake well before use. Take 3 sprays by mouth 2 times per day, or as directed by your health care practitioner.

It is advised that you consult your physician before embarking on any health program. Persons who have gout in particular should consult their physicians before use. A byproduct of some of the DNA and RNA bases is uric acid, which can aggravate gout.

The content of these bases in the formula is quite low compared to the level usually observed to be a possible problem for gout.

If there are any question, please consult with your health care practitioner.