HeartGems™ represent what we believe to be one of greatest nutritional compilations for supporting rejuvenative health and nutrition on the market today.

HeartGems™ are made of an activated combination of powerful nutrients that support your heart and blood vessels, mood, and energy.

HeartGems™ is driven by TMG (trimethylglycine). TMG provides methyl groups that are known to detoxify homocysteine.

HeartGems™ also contains Choline, which provides the methyl groups to support healthy liver and kidneys, and Inositol, which helps to support balanced blood levels. We also included folic acid and the vitamins B6 and B12, which are all key cofactors required for the anti-aging support of DNA methylation.

Homocysteine is an amino acid that can accumulate in your body with age. Your homocysteine levels also increase with smoking, alcohol overuse, oral contraceptive use, eating red meats, and high-fat diets. One study showed that drinking 4 cups of coffee per day elevates homocysteine levels by 10%. Elevated homocysteine levels are also strongly associated with the development of Alzheimer’s disease, strokes, and increased complications in diabetes, lupus, and other chronic diseases.

High homocysteine levels are a major cardiac risk factor. It also advances DNA aging. The average homocysteine level in the U.S. population is 10.  Above the level of 7, every 3-point rise in homocysteine increases heart attack risk by 35%. , approximately 4% of U.S. deaths are due to heart disease.

Homocysteine elevation and increased cardiovascular on the chart below.

At a level of 15, the risk of a major cardiac event is 4 times greater than that of the general population. A recent study indicates that a level over 14 also carries double the risk of Alzheimer’s disease.

HeartGems™ contains TMG (or Betaine, naturally derived from beets) to help support a healthy cardiovascular system as well as mood and well-being. TMG provides methyl groups that are known to detoxify homocysteine — reducing the levels in your body. A methyl group consists of a carbon atom attached to three hydrogen atoms. Methyl groups are widely used in the body for detoxification and DNA repair.

Talk to your health care practitioner about checking your homocysteine levels and you can see the results for yourself! 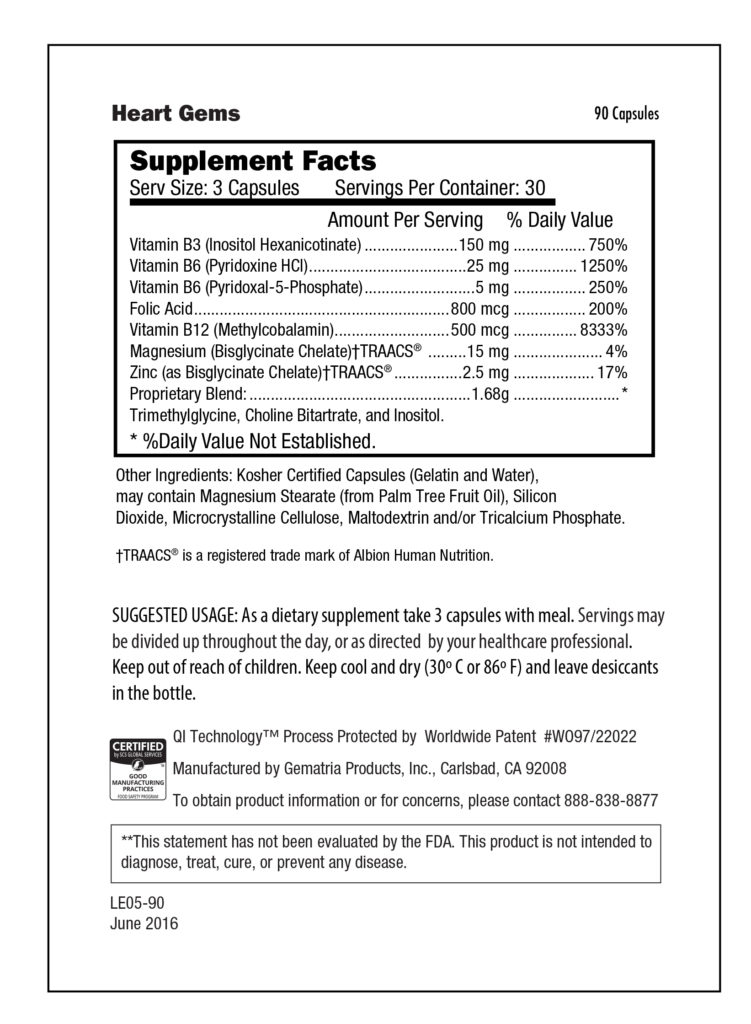 Take 3 capsules by mouth, with a meal. Servings may be divided throughout the day, or as directed by your healthcare provider.

This product is not for persons with manic depressive illness or those taking anti-depressants such as SSRIs, Tricyclics, or MAO inhibitors because of the use of the ingredient Choline.

Have you tried our other longevity supplements?