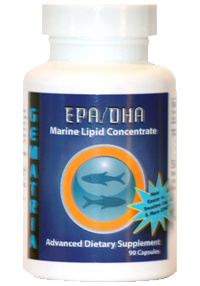 Of all the health supplements that may be ingested, essential fatty acids (EFAs) are among the most beneficial and important. Without these essential fats, the heart and brain become less efficient, and a general predisposition to degenerative processes can occur.

The two main classes of EFAs are omega-3 and omega-6. Among their many important functions, EFAs are used to make powerful short-acting hormones known as eicosanoids. Omega-6 EFAs tend to generate pro-inflammatory hormones, whereas omega-3 EFAs are used to make hormones that reduce inflammatory processes. The optimum ratio for the balance of these effects is felt to be approximately 1:1. However, most foods supplying EFAs in the U.S. diet have a ratio of omega-6 to omega-3 EFAs typically in a 6-20:1 ratio. This means that most diets are not only deficient in omega-3 EFAs, but the ratio of EFAs that are ingested tends to fuel the inflammatory processes in your body.

There are several forms of omega-3 EFAs that differ in their biological effects and benefits. Omega-3 EFAs are distributed heavily throughout cell membranes in the body and help make the membranes more fluid.

Omega-3 EFAs with two double bonds increase fluidity the least, with fluidity increasing with each double bond added, up to a maximum of 6. Fluidity of cell membranes is essential for cell regeneration, detoxification, and optimal receptor function. Membrane fluidity is especially important for the efficiency of brain performance. According to Dr. Joseph R Hibbeln of the National Institutes of Health, “You can amplify message transmission across the synapses a thousand-fold by altering fat membrane consistency.”

In other words, the difference between consuming congealed fats like lard and margarine that stiffen brain membranes and ingesting sufficient amounts of omega-3 EFAs can increase brain efficiency by orders of magnitude.

By far the most powerful EFA for enhancing membrane fluidity, the ” king of omega-3 EFAs for the brain, ” is DHA, or docosahexaenoic acid. With 6 double bonds, it has the lowest melting point, and confers the highest degrees of membrane fluidity of all the omega-3 EFAs. It is so important for optimum brain function that in a healthy brain, fully 50% of the lipid content is in the form of DHA.

As described by Dr. Michael Crawford of the University of North London, an eminent authority on brain nutrition, the hominid brain was stuck for millions of years weighing in at a mere pound. Then, over the last million years, which is only an evolutionary eyeblink, brain capacity expanded rapidly in our prehistoric ancestors that began to eat substantial quantities of DHA-rich fish. This intake of DHA is felt to be the nutritional stimulus that tripled our brain capacity and supported the rise of human civilization.

It is strongly recommended that DHA be supplemented during pregnancy and lactation because of the importance of DHA to the developing brain. Breast fed infants have been found to score 5 points higher in IQ tests as breast milk has 30 times the DHA than in formula milk. It is advised that supplementation begin well before pregnancy as it may take 3-4 years to saturate DHA to optimum levels in tissues.

The use of DHA has been found to increase serotonin levels in the brain, the “feel-good” hormone. Through improved nerve receptor function DHA may also support enhanced function and balance of other neurotransmitters, the molecules nerve cells use to talk to each other. Using DHA has been associated with improvement in depression, mania, and even schizophrenia. There is also evidence to suggest that giving DHA may improve performance in dyslexia and other learning disorders. In addition, clinical studies have shown significantly reduced irritability and hostility in stressful situations when DHA was supplemented.

EPA is similar to DHA and is much more easily converted to DHA than the shorter omega-3 EFAs with fewer double bonds as those prevalent in flax oil. With five double bonds, EPA increases membrane fluidity nearly to the same degree as DHA and has also shown significant benefits for neurologic function.

In establishing the balance with omega-6 EFAs to reduce a tendency to excessive inflammatory hormones, EPA may be as or more important than DHA.

Clinical studies using EPA and DHA have shown the ability to reduce inflammation significantly in arthritis. These EFAs have also been shown to reduce the tendency of blood to clot with protective effects for the entire cardiovascular system. In addition, omega-3 EFAs may improve cholesterol fractions in the blood. Use of EPA/DHA has also been shown to enhance the function of the immune system. In addition, a recent study using high levels of EPA/DHA intake showed a significant improvement in the performance of athletes with exercise induced asthma.

The EPA and DHA in our formulation is the most highly purified of any we have examined, rigorously quality controlled to be free of mercury and organic pollutants. Unlike other EPA/DHA capsules that cause the burping of a strong fishy odor, these capsules rarely cause this reaction, and if so, it is usually very mild in comparison.

Suggested Usage: The recommended daily intake of DHA is 300mg, an amount felt sufficient to support general health needs even during pregnancy and lactation. For supporting brain chemistry with major neurologic or mental disorders, up to 5 times this amount have been used safely and effectively.

The basic recommendation is well achieved with 3 capsules, which provides 360mg of DHA and 540 mg of EPA. There are few more cost effective ways to improve your health and function than in ingesting adequate amounts of the EFAs.

Have you tried our other brain support products?