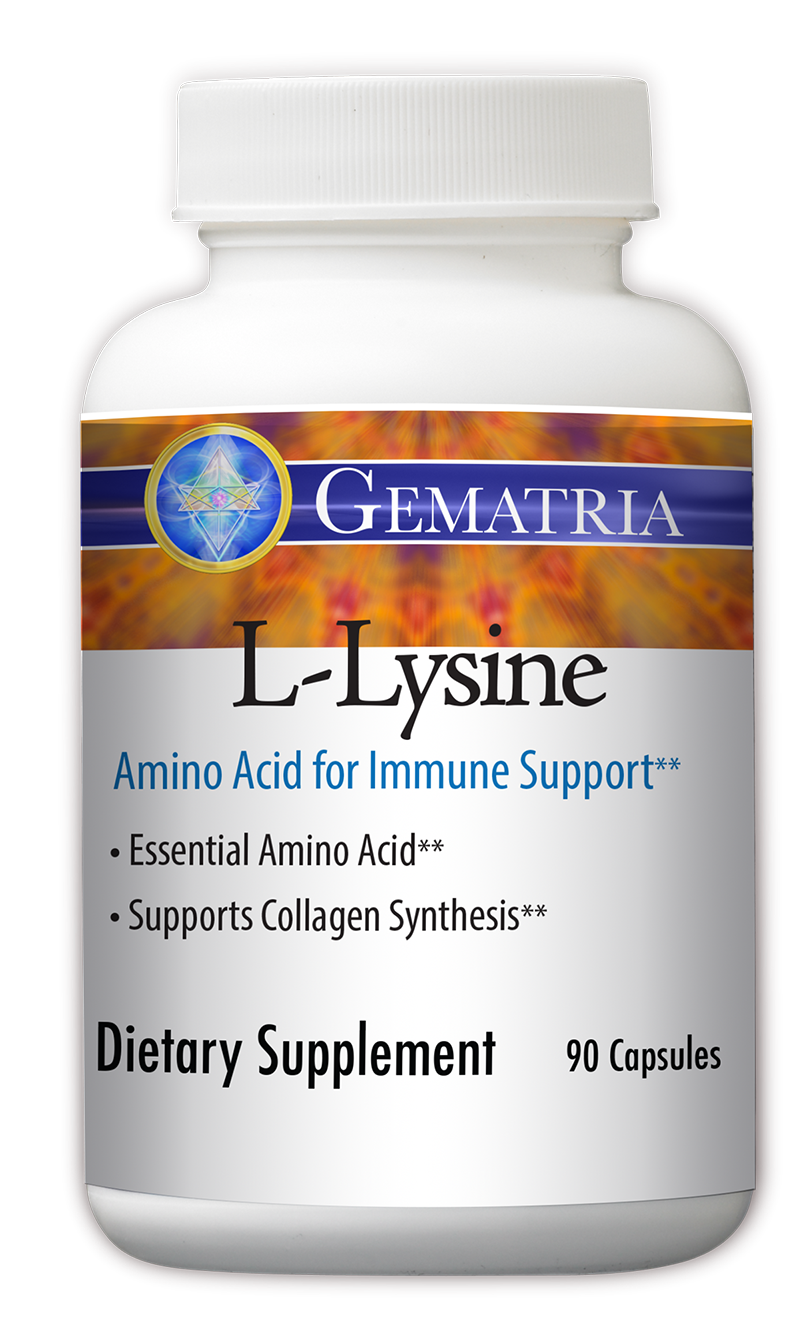 One of the Essential Amino Acids

Lysine helps ensure the adequate absorption of calcium and the formation of collagen for bone, cartilage and connective tissue. It also aids in the production of antibodies (to help combat viruses), hormones & enzymes, and it maintains nitrogen balance in adults and in children. Lysine is essential for proper growth and bone development. Without enough Lysine, or any other of the eight essential amino acids, the body cannot build protein to sustain muscle tissue..

L-Lysine is an essential amino acid or protein building block that cannot be produced by the body and must be obtained from other nutrients. The best food sources for Lysine are lean meats, fish, potatoes and milk.

Lysine helps ensure the adequate absorption of calcium and the formation of collagen for bone, cartilage and connective tissue. It also aids in the production of antibodies (to help combat viruses), hormones & enzymes. It also maintains nitrogen balance in adults and in children. Lysine is needed for proper growth and bone development.

Most individuals have an adequate intake of Lysine; however Lysine levels may be low in vegetarians and low-fat dieters. Without enough Lysine or any other of the eight essential amino acids, the body cannot build protein to sustain muscle tissue. 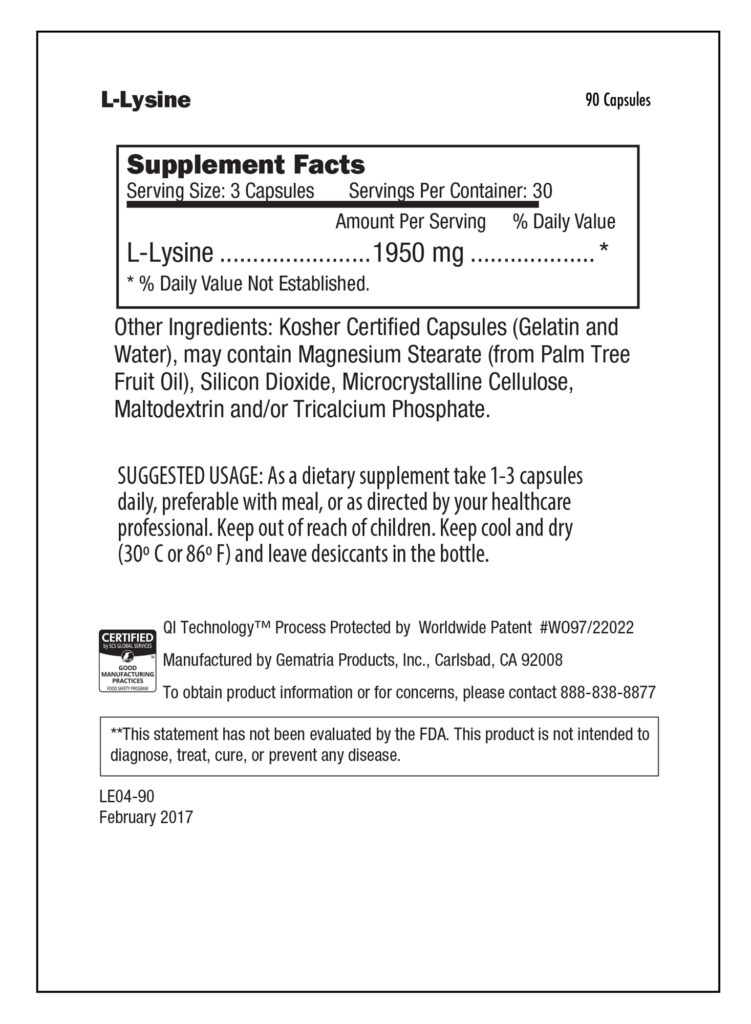 As a dietary supplement for calcium absorption and immune support, take 1 to 3 capsules per day.

If you feel a virus coming on, take 1 Lysine every hour for 8 hours or until symptoms desist. Lysine is best taken on an empty stomach – but if you have forgotten a serving, you may take it with food.

Lysine is best used by individuals suffering from a herpes outbreak or by vegetarians and low-fat dieters. Postmenopausal women can take Lysine to encourage absorption of calcium by the body.

For cold sores: Take 1,000 mg L-Lysine three times a day with meals for flare-ups. If you are subject to recurrent outbreaks of cold sores, continue on a maintenance dosage of 1,000 mg day.

To counterbalance the Arginine effects of the NITROXx, equal amounts of the Lysine (gram for gram) must be taken.

It is also important to note that Lysine and Arginine compete for absorption. For best results, take 2 Arginine with breakfast and dinner and 4 Lysine 30 minutes before lunch on an empty stomach.

According to Linus Pauling, Lysine may help reduce angina pectoris, chest pain caused by insufficient oxygen in the heart muscle. Pauling recommends 5 grams divided throughout the day for this condition.

Lysine strengthens the circulatory system and helps the immune system manufacture antibodies. If you feel a virus coming on, for example, you can take 1 Lysine every hour for 8 hours or until symptoms desist. Lysine also helps control the body’s acid/alkaline balance, influences the pineal and mammary glands and plays a role in gallbladder function. It is necessary for all amino acid assimilation.

In the 1950s, scientists discovered that foods containing certain amino acids could encourage or discourage the growth of the herpes virus. When added to the herpes virus, the amino acid L-Arginine increases the growth of the virus. Lysine, on the other hand, suppresses the herpes virus. There are two types of this virus: type 1, which typically causes cold sores or fever blisters around the mouth, and type 2, which tends to cause genital sores. However, both forms can cause eruptions around the mouth or on the genitals. Once infected with the virus, you have it permanently. It may lie dormant, but it doesn’t go away. Outbreaks are usually painful and unsightly, as well as contagious. Since the virus can cause cold sores, canker sores, and genital sores, Lysine supplements increase the ratio of Lysine to Arginine in the body, curing the outbreak of the virus.

Avoiding foods with Arginine and eating foods with a higher Lysine content will also help alleviate the symptoms of the virus. Foods containing Arginine are gelatin, nuts, and chocolate. Foods containing Lysine are milk, soybeans, meat, lentils, and spinach. In a recent study, participants consumed large amounts of Lysine (about 1 gram three times each day) while restricting food sources of Arginine. A significant number of participants (74%) taking Lysine noticed an improvement in their HSV infections and a decrease in the number of outbreaks. It is important to note at of all the amino acids, Lysine is the most sensitive to the effects of food processing, such as dry heat. The amount of protein available in legumes and other sources of Lysine can be significantly reduced if they have been toasted or roasted. Common foods high in Lysine include nonfat milk (8 fluid ounces, or 245 grams, contains about 660 mg of Lysine) and whole-wheat bread (one slice of wheat bread, or 28 grams, provides 85 mg of Lysine).

More recent studies have also shown that L-Lysine may be effective against herpes. A study done in 1984 showed that Lysine supplements of 1000 milligrams a day helped reduce recurrences of cold sores. Since then it has been shown to have broader immune enhancing effects. Some studies have shown it effective in relieving genital herpes. High doses of Lysine stop viral growth and reproduction, and aids in the production of antibodies, hormones and enzymes. The amino acid L-Arginine, contained in our NITROXx product, may increase the risk of herpes simplex outbreaks. Taking the amino acid Lysine counteracts the tendency of herpes outbreaks.

Herpes zoster is closely related to herpes simplex. Painful shingles blisters are caused by a reactivation of varicella-zoster virus, an infection that started out as an attack of chickenpox. Lysine appears to have a similar role to play in treating an eruption of shingles. Keep in mind, however, that most nutritionally oriented physicians will combine Lysine therapy with conventional antiviral medications such as acyclovir or valacyclovir.

Researchers are exploring the value of Lysine supplementation and the consumption of Lysine-rich foods for lowering cholesterol, improving athletic performance, and enhancing recovery after surgery. Lysine deficiencies can result in lowered immune function, inability to concentrate, loss of energy, bloodshot eyes, irritability, hair loss, retarded growth, reproductive disorders, increases urinary excretion of calcium, and increases the risk of kidney stones in susceptible people. Lysine has no known toxicity. Although a few cases of abdominal cramps and diarrhea have been reported with very high doses (more than 10 grams a day).

Gematria has many great supplements and products. Here are a few you might not know about. Give them a try and let us know what you experience. We love hearing of your success.