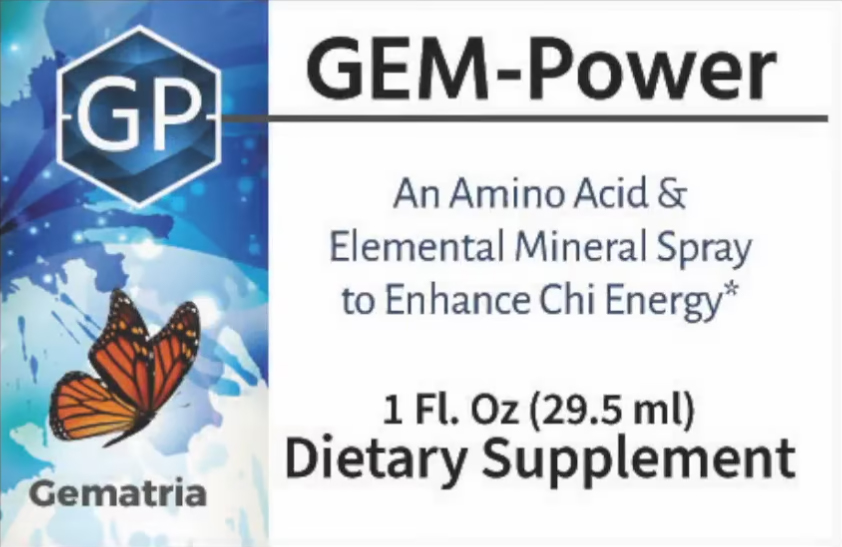 (We’re updating our product labels. The actual label on your GEM-Power may vary from that pictured.)

GEM-Power is our high-energy, all-natural formula for enhancing Qi (pronounced “key” or “chee”) energy. Intended for daily use, the formula contains Monoatomic (single atom) minerals that have electrons that are in a high-spin state, which may support and enhance feelings of vitality, awareness, focus, intuition and creativity.

We use our patented Nanobioelectronic Photoacoustic Technology™ (aka: QiLaser) to uplift the energetic state of our products.

Acetyl-L-Tyrosine, one of the amino acids in GEM-Power, is considered too have the nootropic effects that increase attention, motivation and concentration, and may even improve memory and learning. It is a dopamine precurser and helps to balance seratonin and GABA in your system, which regulate mood. Research suggests it may also reduce neurotoxicity from heavy metals.

Acetyl-L-Carnitine, another amino acid, is known for anti-aging, neuroprotective and nootropic effects. It has been seen to decrease fatigue and improve attention, memory, learning and “executive” function or the abililty to plan and organize. This form of L-Carnitine can cross the blood brain barrier – thus making it more efficient for direct cognitive support. Has antioxidant activity and may prevent and repair oxidative damage to neurons. It is also known to increase energy by supporting the mitochondria in your system.

These are just two of the many reasons why we call this formula GEM-Power! Shake well. Take 2 sprays by mouth, three times per day or as directected by your healthcare practitioner.

In a test conducted with GemAminos over a 120-day period, the majority of the 300 respondents reported increased physical energy, greater mental clarity, deeper insights, enhanced creativity, a brighter outlook on the future, decreased stress levels, higher levels of serenity, and more confidence in facing daily life.